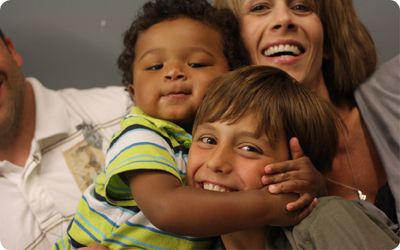 Pick and choose from this collection of Minute-to-win-it games to create your own family game night. You could play as individuals or kids vs. adults. Invite friends and neighbors or play with just family members. However you decide to play, your evening will be full of memory-making as you grow closer together.

Cookie Face
Each player places a cookie on their forehead, and the goal is to get the cookie into your mouth using only your facial muscles in under 1 minute. No hands! This is tougher than it sounds!

Spoon-tastic
Using nothing but a spoon in your mouth, transfer six ping pong balls from one bowl to another in less than one minute. No hands! Hands are only allowed if you drop the ping pong ball, and then they can be used to place the ball back into the original bowl for another transfer attempt. (Don’t have ping pong balls? Substitute marshmallows or conversation hearts!)

Breakfast Scramble
Cut the front of cereal boxes into 8-16 pieces and scramble them. Have the kids either in groups or individually try to put one of the cereal box puzzles back together.

Rudolph
Glue small red pompoms to the ends of pieces of ribbon, each about 6 inches long. Have the players put the string in their mouth so that the pompom is dangling under their chins. Put Vaseline on each of the player’s noses and have them swing the ribbon so that the pompom sticks to their nose. No body parts may be used to help the pompom, and the player must successfully get the pompom to stick 5 times to win.

Bucket Head
One player holds a bucket or bowl on their head. Another player tosses soft balls, marshmallows or cotton balls. Catch three balls or the most in a minute to win.

Elephant March
Set up three bottles in a row. Players must try to knock them over using only a baseball in the end of a pair of pantyhose worn on the head.

Spud-nik
Players are given a potato, five bendy straws and five small candies. Players have sixty seconds to jam the straws into the potato and balance the candies on the ends of the straws.